If you happen to visit Santa Pola from 31 August to 8 September, you can enjoy the Moros y Cristianos festival (Moors and Christians). The Christian’s and the Moor’s parades and the festivities in honour of the Virgen de Loreto take place over that period. The latter commemorates the legend of the Virgin’s arrival by sea in 1643.

The festivities begin on 31 August with the official pregón (opening speech) and the presentation of the cargos festeros (the ambassadors of each group, Moors and Christians). Afterwards, the Barracas de Fiestas are set up (marquees used as a base for each local group taking part in the festivities). The same day the festivities’ artistic lights are switched on; this event is called the alumbrado. Each day begins with la despertà (”the wake-up call”) and the mascletà or cohetà, an explosive coordinated firecracker and fireworks displays, takes place every day of the festival at noon. The party continues at the kábilas, cuartelillos and barracas, the bases used by the group of festivity-goers.

Between 1 and 3 September there will be parades of local bands and Moors and Christians. 2 September is a big day as the Christian embassy, led by the ambassador and his escort, will demand that the Moorish troops leave the Castle. There will be a dramatised battle, and the Christians will reconquer and triumphantly enter the castle. 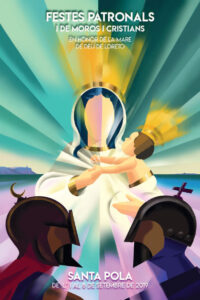 On 5 September at 1:30 pm a beer battle will commence in the port area. Participants toss beer on each other until everyone is completely soaked. In the afternoon, at 6 pm there will be a children’s race in honour of the Virgin de Loreto. Later there will be correbous (a mock bull-run with an inflatable bull) and inflatable attractions in the Glorieta. The Villa Santa Pola choir will perform at 9 pm. A multicoloured parade of floats and comparsa bands will take place on 6 September, and in the evenings of 7 and 8 September you can enjoy spectacular fireworks displays. If you want to learn more about the fiestas you can find the programme here.

What else can you do in Santa Pola?

The Santa Pola Castle-Fortress is definitely a must-see sight. The building has a very interesting history and also houses the fishing museum and an exhibition hall.

Santa Pola lighthouse offers spectacular views over the coastline and beaches. From there you can also see Tabarca island. Santa Pola is the closest point to the only inhabited island in the Autonomous Region of Valencia. Boats leave for the island from the port of Santa Pola all year round. Tabarca is also a marine paradise, featuring a marine reserve of indisputable value, famous for being one of the first in the country.

Another place of interest in Santa Pola is the Salinas Nature Park, an extensive lagoon at the mouth of the Vinalopó river. Here there are three types of formations: the salt marsh, the reed beds and the dune vegetation.